LEWISTON — For most people, mouse poop is a sign they had better get a cat or some traps.

But for one class of Bates College students recently, mouse poop samples opened the door to gather DNA samples, sequence the order of their nucleotides and crunch a whole bunch of data to try to learn something new about the microbiome that exists in the guts of living creatures.

Louise Brogan, a Bates College lecturer who took them to MDI Biological Laboratory in Bar Harbor for the course, said they had an incredible experience that gave them the chance to delve deeply into the subject and to think like scientists as they tried to make sense of the information they found.

It was one little piece of a wide-ranging program that has attracted $86 million in federal funds since 2001 to boost biomedical research in Maine, part of a national effort to bolster the field in states that lack a strong infrastructure for the work. 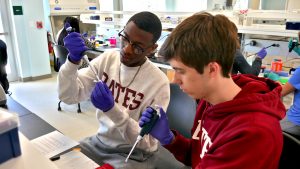 And taxpayers are chipping in another $18 million to keep the Maine IDeA Network of Biomedical Research Excellence growing for another five years.

The program, led by the MDI Lab, includes 13 educational and research institutions in the state, among them the University of Maine, The Jackson Laboratory in Bar Harbor and most of the Pine Tree State’s undergraduate colleges.

For Bates, the program has proved a boon to its ongoing efforts to give students hands-on, high-level research opportunities.

Professor Ryan Bavis, chairman of the biology department at Bates, said the INBRE program’s funding and collaboration has opened doors for students and faculty to do more research with better equipment.

Bavis offered a few examples of the areas Bates professors are exploring.“We love Bates. There’s some really cool science happening there,” said James Coffman, a professor at the MDI laboratory and director since 2016 of the Maine program.

Colleen O’Loughlin, an assistant professor of chemistry and biochemistry, is looking into the microbiome that exists on human skin. 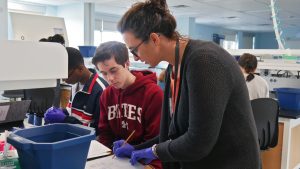 Bates College lecturer Louise Brogan, a Lewiston native, talks with student Cooper Andrews during a short-term course in May at the MDI Biological Laboratory in Bar Harbor. The course is made possible by federal funding aimed at encouraging biomedical research in Maine. Provided photo

Martin Kruse, an assistant professor of biology and neuroscience, is using “a combination of genetic, biochemical, electrophysiological, and computational approaches” to try to understand how the body regulates the rapid changes in nervous system cells.

Bavis said Lori Banks is joining the faculty this summer from Baylor University in Waco, Texas, to continue working to figure out how viruses cross the membranes of cells.

Coffman said Travis Gould, an assistant professor of physics and astronomy at Bates, came up with a high-resolution imaging system that can see tiny particles that should be a great tool for many researchers.

Taken as a whole, it is an exciting time for scientists at Bates, said Malcolm Hill, vice president for academic affairs and dean of the faculty.

Hill said the liberal arts college, founded shortly before the Civil War, is building on “a long history of meaningful science,” adding to its tradition of producing “consequential scholarship” and ensuring students are offered “a serious investment of time, talent and energy” from the professors training them.

The idea is “to bring students into the process,” Hill said. 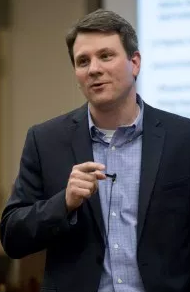 Brogan, a Lewiston native, said one of the ways the biology department pushes students toward participating in science is a yearly short course offered in May in which instructors take a class to the MDI Lab — overlooking the ocean on Mount Desert Island — to tackle projects that show the nuts and bolts of science, from learning to use a pipet to coding computers to visualize a mountain of data.

What made it work so well, Brogan said, is she could collaborate for her “Gut Biology” short course with experts from MDI and Jackson labs and get help from colleagues at other institutions.

That is also the notion behind INBRE: That by giving students at all of its partner schools a shot at participating in real research with top scientists, usually over the summer, they are more likely to join the field and perhaps stay in Maine to use their skills.

There are statistics to bolster claims the program is boosting Maine’s scientific status — creating more than 100 jobs and providing research training for more than 2,250 Maine students over the years — but proponents focus more on something less tangible.

Bavis and Coffman said the collaborative research opportunities the money allows help spur interest in scientific research among students, and assist young faculty in particular to turn ideas and narrow specialties into something more lasting and important.

Back in 2004, Juyoung Shim, a junior at Bates, agreed to take a one-week course at MDI Lab as part of then-new INBRE program. She said she was trying to decide a topic for her senior thesis before heading to medical school. 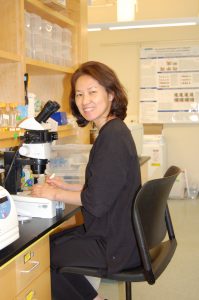 What she saw when got to Bar Harbor “really changed my horizon,” Shim said.

She said she got the chance at the lab to grind up lobster tissue, extract DNA from it and to sequence it.

“Everything was kind of an eye-opening experience” that provided a whole new conception about science and the pleasure of doing serious research, Shim said.

After graduating from Bates, she wound up in Bangor, started work as a research technician and ultimately earned a doctorate last spring from the University of Maine, serving along the way as a mentor for other INBRE students from UMaine’s Farmington and Machias campuses.

“Those areas are kind of underserved,” Shim said, and she especially wanted to give students from them the opportunity.

Shim said one Farmington student, who was eyeing a nursing career, spent a summer with an INBRE program with her and generated such “beautiful, beautiful data” that she earned a spot as the co-author of a scientific  paper. That student is now a researcher in Boston and likely headed to graduate school.

It is those kinds of experiences that create researchers, experts said.

Shim said there are “opportunities in Maine” to make a career without moving away, something she has found herself since moving to the state from South Korea and deciding quickly she never wanted to leave. 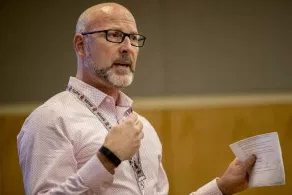 Staying at that high level, though, “requires maintaining the pipeline of talented graduates of our world-class colleges and universities to research institutions throughout our state,” the senators said recently as they praised the INBRE program for encouraging young people “to find jobs here in Maine and promote discoveries to improve human health.”

For those who are not scientists, it can be difficult to see how research on obscure topics matters.

Take, for instance, the scrutiny of zebra fish, one of MDI Lab’s endeavors.

Coffman said the shared genetics between the fish and humanity may lead to a better understanding of the science underlying how they work that may lead to breakthroughs that might help ailing people.

For her part, Brogan said scientists are learning more and more about how microbiomes within the body play a role in keeping people healthy.

“We’re not in this world alone,” she said, referring to the vast array of microscopic creatures that live on and within us, mostly to our benefit.

Getting the chance to do real science, Bavis, said, has led many students into the field. 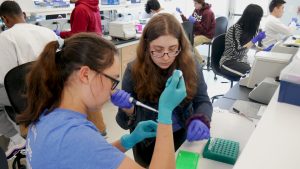 Hill said working with national experts on serious science can open pathways that lead young people into careers they may never have imagined, especially for students coming from less-privileged families.

They learn, he said, “every student can thrive, not just survive, in an academic discipline.”

In the past, fields related to math and science, Hill said, “have been weakened by not having a full representation of humanity contributing to what we’re trying to do.”

“We need multiple perspectives and voices at the table,” Hill said, to tackle the many issues with which scientists are dealing these days — from the climate crisis to health care.

The federal cash flowing into Maine for biomedical research is one way to clear the way for them, officials said.

Spread around, the money makes a difference at each of the partners within the program.

At Bates, Bavis said, it will likely add up to about $3 million during the five-year period, covering everything from pay for interns at research companies to summertime research that pairs students with professors to equipment that can be shared.

He said one of the high-tech instruments that Bates got through the program is being used at times by faculty and students at Southern Maine Community College because of ties developed through the INBRE initiative.

“This grant lets the students undertake research at a much higher level than they could otherwise do,” she said, according to a statement released by the college.

Over the past five years, the INBRE program has helped to achieve a 65% increase in the number of science majors at its participating institutions.

It found nearly nine of 10 INBRE graduates have gone on to pursue advanced degrees, and one in five is employed in Maine in a wide range of science-, technology- and health-related careers.