HomeNewsIn The MediaGrant Will Support Study of Arsenic in Well Water

BAR HARBOR — The MDI Biological Laboratory has announced that it is expanding its innovative SEPA (Science Education Partnership Award) program, which aims to improve secondary school education in data literacy while addressing the public health threat posed by arsenic in well water.

The National Institute for General Medical Sciences, an institute of the National Institutes of Health, has awarded $162,700 over three years to the MDI Biological Laboratory for support of the supplemental program, titled “Arsenic in All Seasons.” The program will be led by Jane E. Disney, senior staff scientist and director of education at the MDI Biological Laboratory.

Under the supplemental program, Sarah R. Hall, a member of the earth sciences faculty at College of the Atlantic and two to four undergraduate interns per year will conduct a monitoring program to assess how levels of arsenic in well water vary by season. They will also engage students at Mount Desert Island High School, using data collected from students’ homes. 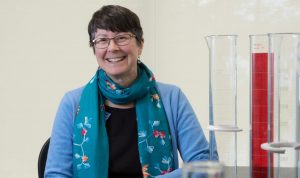 Maine has among the highest per capita reliance on private wells for drinking water in the nation, but few residents have their wells tested and some standard tests in Maine do not include arsenic, which has been designated by the U.S. Environmental Protection Agency (EPA) as the environmental contaminant with the biggest impact on human health.

According to the EPA, long-term exposure to arsenic, even at low levels, can lead to severe health problems, including cancer, diabetes, heart disease and reproductive, developmental and cognitive problems, including lower IQs in children. Arsenic is a particular problem along the coastal “arsenic belt” in New England, where up to 60 percent of wells exceed EPA limits.

In addition to improving public health, the supplemental program also aims to stimulate interest in STEM (science, technology, engineering and math) fields among secondary school students through the “near peer” engagement of undergraduates. The Bar Harbor program will serve as a model for other Maine institutions involved in the SEPA program, as well as for citizen science programs nationwide.