BAR HARBOR — The William Procter Scientific Innovation Fund has been established at the MDI Biological Laboratory in honor of William Procter (1873-1951), a businessman, entrepreneur and scientist. Procter’s seven-part “Biological Survey of the Mount Desert Region,” published between 1927 and 1946, has been an invaluable resource for biologists studying the fauna of the Mount Desert region.

The fund will provide up to $50,000 annually to full-time faculty members, students or research fellows at the MDI Biological Laboratory or its spinoffs to support areas including high-risk/high-impact research, basic scientific research with potential for commercialization and education programs focused on translating scientific discoveries into commercial applications.

“We are enormously grateful for the establishment of the Procter Fund, which will support research that may be perceived as conceptually risky by traditional funding sources,” said Kevin Strange, president of the laboratory. “The fund honors the legacy of Procter, who as a creative businessman recognized the need for out-of-the-box approaches to make revolutionary advances.”

Procter was the grandson of William Procter, founder of Procter & Gamble, and an active board member until his death. He also was a co-owner of Procter and Borden, a Manhattan securities firm. But his real love was science, to which he devoted most of his life. In addition to the survey, which he launched at the MDI Biological Laboratory in the 1920s, he was an active supporter of many scientific causes and organizations. 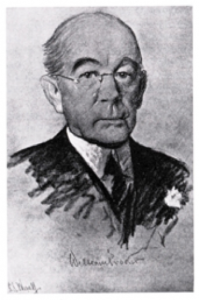 Procter made significant contributions to the laboratory, for which he served as trustee and president. Under the influence of early naturalists like Louis Agassiz, a Harvard professor who urged his students to “study nature, not books,” he established a research station at the laboratory in 1921. Though he would later relocate to a larger facility at his summer cottage, Corfield, in Bar Harbor, the buildings he constructed remain.

Procter’s interest in innovation grew out of his board membership at Procter & Gamble. “For more than 175 years, innovation has been in our DNA,” reads a company slogan. One of the company’s innovators was Procter’s farther, Harley Thomas Procter, a marketing pioneer who turned P&G into a household name with his decision to rename its soap “Ivory.”