Acadia Aqua Farms is owned by Theo and Fiona de Koning of Bar Harbor. Their sons Alex and Max are both involved in running the operation. The company holds leases from the Maine Department of Marine Resources for bottom culture of mussels at five sites totaling 158.45 acres.

The proposed new lease does not, however, indicate a company plan to increase production, which is about a million pounds of mussels per year.

“It’s our idea to stay at roughly the same amount of mussels we have now,” Theo de Koning said at an initial public meeting about the lease proposal, called a scoping session, last Thursday at Mount Desert Island High School.

Instead, the company is hoping to try out a new method of mussel seed collection in this area of upper Frenchman Bay, and to try out farming sea scallops and clams (both hard and soft shell).

Currently, the de Konings collect seed mussels along the shore in the intertidal zone, in mudflats shared with clammers and other uses.

“There’s very little conflict, perceived or real, between the clamming industry and the mussel seed harvest,” Fiona de Koning told the Mount Desert Islander Monday. The settlement time for clams is similar to that of mussels. It can actually be helpful for clammers when someone harvests seed mussels, she said; otherwise, a “mass settlement” of mussels could “smother” the clam bed.

Sharing the flats with clammers, landowners and other humans is going fine. But mussel settlement has been getting more unpredictable, as conditions in the bay are changing, so Acadia Aqua Farms is proposing to try to grow seed mussels on submerged nets hanging from horizontal pipes in the water, a technique pioneered in Norway.

“By far the biggest challenge we face is the rate of environmental change,” de Koning said. “Farming is all about mitigating risk.”

Growing on the mussel pipe system, seed mussels would be protected from predators (primarily starfish) with nets, but that doesn’t mean a square net hanging in the water around the whole lease site. Each pipe would have its own net draped over it, under some tension. That presents less of a risk for seals and other animals, Alex de Koning explained at the scoping session.

Only one Bar Harbor shorefront property is within 1,000 feet of the proposed lease site, but the site is in view of some buildings at the MDI Biological Laboratory (MDIBL), including a new education building with large windows on the water side.

“I’ve made a lot of compromises on this bay, but this one really bugs me,” Jane Disney, director of education and director of a Community Environmental Health Laboratory at MDIBL, said at the scoping session. “This area is not an industrial zone, it’s not a working waterfront. It never has been. And this changes that.”

She said she was concerned about visual and noise impacts from the operation. 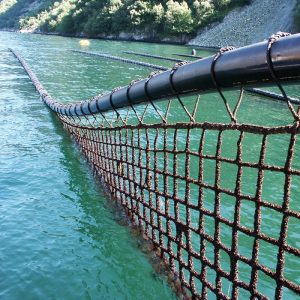 A photo of a mussel pipe system of the kind proposed by Acadia Aqua Farms for collecting mussel seed in a proposed new aquaculture lease site off Leland Point. PHOTO COURTESY OF SMARTFARM

“You’re the most industrious family I’ve ever known,” Disney told the de Konings. “I admire your work ethic and I admire your cleverness, but I wonder if upper Frenchman Bay needs more and more.”

Jerilyn Bowers, the development director at MDIBL, asked about what the lease would mean for boat traffic. The mussel pipes, Alex de Koning said, will be at least 35 feet apart. “Unless you’re bigger than the Bar Harbor Whale Watch boat,” he said, “you can navigate straight through this lease.”

At the meeting, Fiona de Koning stressed that the lease application process requires the company to describe the maximum possible area needed, gear density, frequency of work at the site and other factors. “Our aim has been to present our best guess at the very most impact you could possibly expect, but our belief is that we may end up with significantly less.”

In the application, the company also had to illustrate what it would look like if it used the whole lease area for each of the proposed uses.

“To comply with the lease application regulations we must portray the impact of this lease showing this lease fully utilized for mussel farming using the pipe system, and drawings showing the lease fully utilized for scallop and/or clam farming, using longlines,” the draft application said. “Obviously we cannot fully utilize the lease in both growing techniques at the same time. In practice there will be some combination of the two techniques depending on environmental/climate changes, the farming success of new species and market dynamics.”

The next step in the application process is for Acadia Aqua Farms to submit a final application to DMR. A public hearing is required before the commissioner makes a final decision on the lease.