A discovery made five years ago by scientists at MDI Biological Laboratory (MDIBL) is causing quite a lot of excitement. It’s a molecule with the scintillating name of MSI-1436 that has been shown to stimulate the repair and regeneration of heart muscle in mice after a heart attack. Following that breakthrough, MDIBL President Kevin Strange and his research colleague Voot Yin created a company called Novo Biosciences to explore the molecule’s potential to have the same effect in other mammals and, ultimately, in humans.

“People have been looking for drugs to do what ours does for 45 years,” Strange said. “We don’t know if it will work in humans, but if it does it will change the world. It will change the way we treat a heart attack.

“Right now, if you have a heart attack and survive it, the best medical science can offer you is drugs and treatments that hopefully will prevent you from having another heart attack. But the part of the heart muscle that was damaged by the heart attack never repairs itself; it becomes scar tissue.”

Novo Biosciences last fall received a $1.5 million grant from the National Institutes of Health to study the effectiveness of MSI-1436 in pigs.

Although Novo Biosciences is a separate entity, it is located at MDIBL and Strange is its CEO. 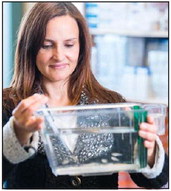 Using zebrafish as a model, researcher Sandra Rieger has identified two compounds that reverse the effects of a disabling neurological condition brought on by exposure to the widely known cancer drug Taxol.
MDI BIOLOGICAL LABORATORY PHOTO

Another MDIBL enterprise that might be spun off as a separate company is called Anecdata. It is described as “an innovative online platform for citizen science projects to collect, manage and share environmental data.”

Strange said it also can be used to crowdsource data in practically any field, not just environmental sciences.

MDIBL also is incubating several start-up companies on its campus. They include Coagulation Sciences, which is developing a testing system to help hospitals eliminate unnecessary blood transfusions, and RockStep Solutions, which develops information systems for biomedical laboratories.

Last spring, MDIBL opened the Maine Center for Biomedical Innovation, which was funded by a $3 million state bond issue. The goal, according to the lab, is “to build an entrepreneurial ecosystem for Maine that trains students to adapt to a rapidly changing job marketplace and provides entrepreneurs with the skills and resources to turn their ideas into successful businesses.”

MDIBL is the lead institution in Maine INBRE (Idea Network of Biomedical Research Excellence), which is a collaboration of 13 educational and research institutions.

“The only way you can adapt and live in this world is through science and technology and information sciences,” Strange said. “If we really want to have the kind of economy that we need to stay robust as a state, then we’ve got to have that.”