PRESQUE ISLE,  Maine — The University of Maine at Presque Isle is pleased to announce the recipient of the Donald and Linda G. Zillman Family Professorship for 2019-21: Dr. Judith Roe, associate professor of biology at the university.

The professorship — established by former university president Don Zillman and his wife Linda Zillman — is awarded every two years to an University of Maine at Presque Isle faculty member to assist in research and faculty development. Established with proceeds from a designated fund at the Maine Community Foundation, this is the university’s first rotating professorship.

“We are so pleased to have Dr. Judy Roe serve as the 2019-2021 Zillman Professor,” University president Ray Rice said. “This is not only a fitting recognition of Judy’s research work, but also a tribute to the work she continually does to encourage collaboration and involve students in the process as undergraduate researchers.” 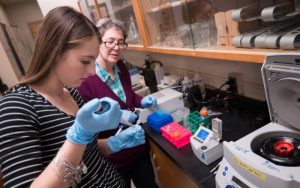 University of Maine at Presque Isle’s Dr. Judy Roe, associate professor of biology, works in the lab with a student. Roe has been awarded the 2019-2021 Zillman Family Professorship.

“Professor Roe exemplifies everything that UMPI offers to its students, its community and the worldwide research community,” Don Zillman said. “Linda and I are envious of the discoveries that lie ahead for the students in the project.”

Roe serves as the campus’ fourth Zillman professor since the professorship was established in 2013. Over the course of two years, she will use the Zillman Professorship funds to oversee a biomedical research project investigating a new animal model system for organ regeneration. The work will involve undergraduate students participating in the research and allow Roe to collaborate with the Mount Desert Island Biological Laboratory  in Bar Harbor.

“There are a number of model systems out there, but, using a comparative approach, the hope is that we can help to expand knowledge on the genetic basis of regenerating organs,” Roe said.

The laboratory conducts regeneration and aging studies with fish, worms and salamanders. Roe’s work will involve working with an invertebrate: the common earwig. She explained that there is scientific literature from the 1950s and earlier suggesting that earwigs can regenerate their pincer organs. She and several university students have conducted preliminary studies over the last two years supported by Maine INBRE that confirms this.

“The goal now is to get some good genetic evidence,” Roe said. “We’re trying to determine the best conditions where we can grow these common earwigs and see them form colonies. That would allow us to do genetic studies and examine the cellular mechanisms, anatomy and physiology happening during the regeneration. The goal is to uncover the genes that are helping the regeneration happen and to determine if the cells are reverting back to stem cells that then create the same structure again.”

As part of her research, Roe will use advanced microscopy resources and the high level of bioinformatics expertise available at the Bar Harbor laboratory. So far, five students have been involved with the research and she hopes to engage at least 10 throughout the course of the project.

“A major goal with this project is to provide training for students and give them opportunities to take part in research, so they can get important hands-on training to prepare them for their future biomedical careers,” Roe sad. “This is a very special type of opportunity. It’s individual, it gets them involved in authentic science, it gets them out of the textbooks and they find out how science is actually done.”

She aims to complete preliminary studies on this research so she can present the findings at professional conferences and write a grant to continue the research.