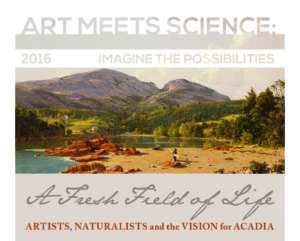 The landscape painters of the 19th century and early naturalists inspired by the publication of Darwin’s “Origin of Species” shared a passion for the detailed observation of the natural world and a commitment to communicating their vision to a wider audience. Though they used different tools — palettes and easels in one case and magnifying glasses and logbooks in the other — they were focused on developing a deeper understanding of the flora, fauna and “physiognomy,” as they called it, of a landscape that even then was quickly disappearing.

Nowhere was this intersection between art and science greater than on Mount Desert Island, the location of Acadia National Park, the first national park east of the Mississippi. The public interest in Mount Desert Island as a tourist attraction is credited to painter Frederic Church, who first came to Mount Desert Island in 1850. His detailed images of the island’s coves and cliffs displayed an engagement with the landscape so intense that it bordered on the scientific: plants and trees, for instance, were so clearly rendered as to be readily identifiable.

The paintings of the island’s majestic beauty by Church and others, in turn, drew early naturalists such as Charles William Eliot Jr. Elliot, who first came to the island as a boy in 1871, returning 10 years later with a group of fellow Harvard students who called themselves the Champlain Society after the French explorer who first explored the region. These young men — the earliest scientists on Mount Desert Island — hiked its peaks and valleys on a daily basis, surveying and cataloguing the island’s natural life.

The ambition to celebrate the landscape through art and to understand it through science came together with the preservation of the land for Acadia National Park, which is celebrating its 100th anniversary this year.

Among the the park’s founders were Elliot’s father, the president of Harvard, who carried out his son’s vision for the park after the latter’s premature death, and George B. Dorr, known as the father of Acadia. They saw the park as a refuge for the spirit, but also as a laboratory for scientists. Dorr later became instrumental in establishing the Mount Desert Island Biological Laboratory on Mount Desert Island. Founded in 1898, it is one of only a handful of laboratories created as a result of the interest in nature stimulated by Darwin that is still extant.

This summer, art and science will come together again at an Art Meets Science exhibit to be held at the MDI Biological Laboratory. The title of the exhibit, “A Fresh Field of Life: Artists, Naturalists and the Vision for Acadia,” is drawn from Dorr’s remarks at a 1916 celebration of the proclamation creating the park:

“… what a splendid and useful thing it would be if we could provide down here, in a spot so full of biologic interest and unsolved biologic problems, so rich in various beauty and locked around by the cool northern sea, a summer home, however simple, for [scientists]…. They would come down to work on a fresh field of life, bird or plant or animal …”

The aim of the exhibit is to draw artists and scientists together in a celebration of the natural world, from the stunning scenery of Acadia to the microscopic world of molecular biology. Though the motivations are still the same as those of their 19th century predecessors, today’s artists and scientists are able to draw upon the fruits of a century’s worth of scientific inquiry to understand the structures, patterns, processes and relationships within the hidden worlds of the cell – worlds that Church and Elliot never would have dreamed of.

Scientists at the MDI Biological Laboratory, for instance, who once studied marine life, are now focused on the study of organisms such as zebrafish that have retained the miraculous ability to repair and regenerate tissue. Genetic science has revealed that although humans share genes for tissue regeneration with these lower organisms, they have been deactivated. The scientists at the laboratory believe that by turning these genes back on they will be able to delay aging and treat the degenerative diseases of old age such as heart disease and Alzheimer’s.

One hundred years after the founding of a national park and a scientific research laboratory, artists and scientists inspired by Mount Desert Island are demonstrating that the natural world is still yielding a “fresh field of life” for exploration.

The organizers of the Art Meets Science exhibit are seeking submissions from artists whose work reflects observations of the natural world.  The call is open to local, national and international artists, with applications from scientists who are also artists especially welcome. The exhibit will be held at the laboratory from June 20 through Sept. 30, 2016, with an opening reception on July 7. Applications are due March 15, 2016. For more information, please visit mdibl.org/events/art-meets-science or email Bonnie Gilfillan at bgilfill@nullmdibl.org.