HomeNewsIn The MediaAnti-aging: the worms that may help us live longer, healthier lives 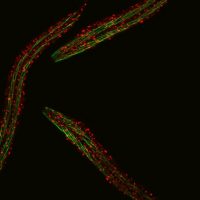 At first glance, Jarod Rollins’s work looks like magic. In a cove on an island off the coast of Maine, Rollins spends his days examining transparent worms in the hopes of extending human life. Of course, it’s not really magic, it’s science: Rollins works at the MDI Biological Laboratory, a non-profit research institution, and is motivated by a desire to “help people age more gracefully or even turn back the aging process”. In July 2019, Rollins and 10 other researchers from across the globe made a monumental breakthrough: they increased the lifespan of some Caenorhabditis elegans worms by 500%.

The reason these unassuming roundworms are frequently used in aging research is because they share many of their genes with humans. An ordinary C elegans worm will live for three to four weeks – Rollins and his team kept them alive for months.

“If we do make a discovery in C elegans and find a gene that helps regulate the rate at which they age, there is a good chance that that research is going to apply directly or indirectly to humans,” he explains. “I’m not in the business of making worms live longer,” he laughs, “I want to make people live longer and healthier, and worms are just one step on the way.”

The worms in the experiment lived longer because his colleagues in China altered two signalling pathways in their cells. These pathways were previously both linked to aging – in the past, experiments altering one of the pathways had doubled C elegans’s life expectancy, while experiments with the other increased the worms’ lifespan by 30%. The team expected that altering both pathways simultaneously would see worms living 130% longer. Instead, they lived five times longer.

Mutating the two pathways sends signals to cells telling them to use dietary nutrients to go into “maintenance mode” instead of “growth mode” – fixing the damage caused by age. But what are the immediate repercussions? Rollins explains that scientists used to look for one “silver bullet” in anti-aging research, but the therapies that “are going to have the most effect are probably going to stimulate multiple different genetic pathways at once… This is really going to change how people look at the aging process.”