BAR HARBOR — After six years, Peter J. Allen, professor and chief of surgical oncology at Duke University stepped down as chairman of the board of the MDI Biological Laboratory (MDIBL) but will remain on the board.

In recognizing Allen at the recent annual meeting, Ed Benz, the acting chair and long-time board member, said Allen, who was born in Maine and graduated from Orono High School, was the “first ‘genuine’ Mainer to serve in this capacity in the laboratory’s 121-year history.”

After graduating from Dartmouth Medical School and following a residency at Walter Reed Army Medical Center, Allen served one year on a forward surgical team in Iraq that provided acute trauma care to soldiers injured in combat and to Iraqi patients in hospitals in Bagdad and surrounding villages. “He resolutely and brilliantly served in the face of even the most challenging environments,” said Benz.

Benz credited Allen with leading the laboratory through “a time of incredible growth and change, steering us through rough waters and calm seas with extraordinary professionalism, dignity and collegiality.”

One of the reasons Allen cited for his decision to step down was that the lab is in a good place: It has moved from being primarily a seasonal lab with just one or two research groups to a full time research facility focusing on aging and regenerative biology. 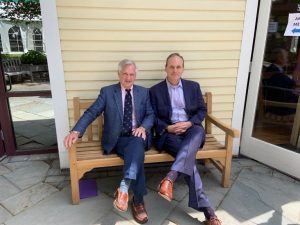 In the last 15 years, the lab has built a major research building and established the Maine Center for Biomedical Innovation. Allen also credited the faculty with successfully competing for federal funding — funding that, while it does not cover all the costs of conducting cutting-edge research, goes a long way to ensuring the lab’s sustainability.

Last year, the board hired a new president, Herman Haller, who holds a joint appointment with the lab and Hanover Medical College.

“Ed and Herman work well together and they’ll find another board chair who will also work well with Herman,” said Allen. He credited Haller with recruiting Iain Drummond, “a top scientist out of Harvard.”

This summer, Drummond was a visiting scientist at the lab and will join the lab as a professor and senior scientist this fall. “It’s exciting to have a senior scientist like Iain to mentor junior faculty — mentoring they need to succeed,” said Allen.

“I initially became involved with the lab because it does such a great job for Maine students. The lab is in a good place, but it’s the appropriate time for a change and change is good. Being chair has been a lot of fun, I’ve learned a great deal, and met wonderful people.

“While I am no longer chair, I am not leaving the board yet and look forward to continuing to watch the lab grow, and I hope to help with further transition into a nationally and internationally recognized research facility focused on regenerative biology and aging research.”

In honor of Allen’s tenure as chair, the board “passed the hat” among themselves to establish a $50,000 discretionary fund for the president. The board also presented Allen with a bench marking his six years as chair—a bench, said Benz, that will remind all of Allen’s many contributions.