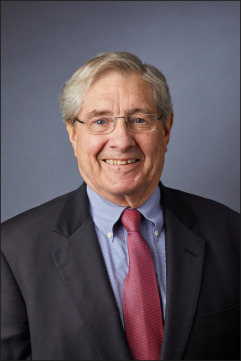 It is a great privilege and honor to introduce Prof. James L. Boyer at the International EASL Recognition Award Ceremony 2020. Prof. James (“Jim”) Boyer is the Ensign Professor of Medicine and Emeritus Director of the Liver Center at Yale School of Medicine, New Haven, Connecticut, USA. As a role model physician scientist and academic mentor of many European hepatologists he has shaped our field at the highest international level and matches every criteria for such an illustrious award.

Jim was born on August 28th, 1936 in New York City and received his undergraduate education at Haverford College, a small Quaker-founded liberal arts college outside Philadelphia. Already during college and medical school, Jim was fascinated by research. He obtained his M.D. from the Johns Hopkins University School of Medicine (1962) and early clinical training at the New York Hospital. Initially Jim wanted to become an infectious diseases specialist but soon discovered his fascination for hepatology during a stint with the U.S. Public Health Service; he was assigned to the Hopkins International Center for Medical Research and Training in Calcutta, India (1964-1966) where he studied portal hypertension. By the time of his return from India he was already fully committed to becoming a hepatologist and was accepted into Gerald Klatskin’s legendary postdoctoral fellowship program in hepatology at Yale after a final year of medical residency at Yale New Haven Hospital. Klatskin had also spent 2 years in India during World War II and had developed his interest in liver disorders during that time. Jim always wondered whether these historical parallels had somehow influenced Klatskin’s decision to accept him into the program.

It was during these early days at Yale that Jim became fascinated by the mechanisms of bile secretion when observing its production in the isolated perfused rat liver during studies on lipoprotein metabolism. At that time very little was known about the mechanisms of bile formation. This was the beginning of an extremely productive scientific career which has spanned more than half a century at the highest international level. Jim rapidly moved through the academic ranks, first at Yale University School of Medicine and later at the University of Chicago and Pritzker School of Medicine where he became Director of the Liver Study Unit and full Professor of Medicine. After 6 years in Chicago he returned to Yale in 1978 to expand the legacy of Klatskin by heading the Liver Study Unit, uniting the Digestive Disease Section which he directed for nearly 15 years (1982–1996) and founding the internationally highly visible, NIH-funded Yale Liver Research Center which he directed for an impressive period of 25 years (1984–2009). He is also former Director of the NIEHS Center for Membrane Toxicity Studies at the Mount Desert Island Biological Laboratory in Salsbury Cove in Maine (1992-2010), where he was also Chairman of their Board of Trustees and past Chair, Board of Directors of the American Liver Foundation.

Jim is a member of many international and national professional societies and past president of both the American (AASLD) and the International Association for the Study of Liver Disease (IASL). He is the recipient of multiple honors and awards including the Ismar-Boas Medal, Windaus Prize and Distinguished Achievement Awards from the American Gastroenterological Association, AASLD and American Liver Foundation. As a reflection of his breadth and depth of knowledge, he has served on many scientific advisory committees, editorial boards and as an Associate Editor for Hepatology, Journal of Hepatology and the milestone textbook The Liver; Biology and Pathobiology.

Jim Boyer has a broad interest in many aspects of basic and clinical hepatology. He is a world leader in the area of bile formation and cholestasis, clarifying key aspects of the cellular and molecular mechanisms of bile formation and bringing them into the context of pathophysiology and treatment of cholestasis. He has contributed more than perhaps any other individual to determine how bile is formed and which mechanisms go awry in cholestasis. Over the impressive period of 50 years he has maintained a highly productive laboratory group which was continuously supported by NIH funding. To date, Jim has published more than 540 papers, his translational approach has led to landmark publications in both experimental and clinical hepatology in the top journals of our discipline. It is striking how many papers he has published that have subsequently been heavily cited and that have formed cornerstones for the next steps in the field. As a highly successful academic mentor he has trained in his lab more than 60 fellows from around the globe – with an impressive number of trainees from Europe – and a nearly uncountable number of clinical fellows, many of whom have become national and international academic leaders in the field of hepatology and academic medicine.

Jim has always been an innovative leader and at the forefront of applying new approaches such as electrophysiologic techniques, isolated hepatocyte couplets and bile ducts units, membrane vesicle preparations for transport studies and the rapidly expanding tools of molecular biology to address critical questions in biliary physiology and the pathophysiology of cholestasis. He always emphasized that technical advances are usually what change scientific paradigms and lead to advances in a given field. By introducing the hepatocyte couplet and the isolated bile duct unit models, he enabled secretion to be examined in these cells at the single cell level. More recent work has focused on the role of nuclear receptors in regulating hepatobiliary transport systems in the adaptive response to cholestasis and their therapeutic potential, the immune and inflammatory mechanism driven by bile acids and biliary organoids as models to study primary sclerosing cholangitis at the level of personalized medicine. Jim is a role model physician scientist.

As a strong believer in cross-fertilization between scientific disciplines, he recognized that sometimes one must venture out of the norm and explore novel research opportunities. He has always been convinced that a better understanding of hepatobiliary and gastroenterology organ (patho)physiology not only enhances clinical skills but also helps to address the most relevant scientific questions. This may explain his dedication since 1971 to the Mount Desert Island Biological Laboratory in Maine, which also allowed him to pursue his passion for watersports and nature. It all started in search of a marine species that might have a bile canaliculus where micropuncture and sampling of the primary secretion might be possible.  One of the many major discoveries which came out of this transspecies approach – together with the late Ned Ballatori (one of Jim’s first and most influential fellows) – was the discovery of a novel basolateral bile acid transporter, the organic solute transporter (Ost-Ost α/β), as the last remaining link in the chain of transporters in the enterohepatic circulation of bile acids. Importantly, the relevance for human pathophysiology has recently been emphasized by the discovery of mutations causing a disorder with cholestasis, liver fibrosis and congenital diarrhea. Thus, basic discoveries of a novel transporter in the liver of an evolutionary fish (little skate) have unexpectedly given rise to important insights into human biology and disease that would not otherwise have occurred. Jim likes this recent example to emphasize the importance of basic research and the role of serendipity in obtaining clinically meaningful outcomes.

Jim Boyer is also a very caring physician, who is loved and admired by his patients and colleagues who frequently seek his clinical advice. He is not only an excellent hepatologist in his own subspecialty and research area focusing on autoimmune and cholestatic liver diseases, but his work encompasses the whole spectrum of clinical hepatology and internal medicine. As a clinical scientist he has also contributed to early landmark studies defining the natural history of primary biliary cholangitis and primary sclerosing cholangitis.

What are Jim’s secrets to maintaining a vibrant and productive laboratory for more than 50 years, beyond when most of his peers have already retired? Jim has always been more than willing to pass on knowledge and share his vast experience as a physician scientist with younger investigators seeking his advice. First of all, Jim has always been driven by his curiosity and passion for science which kept him young at heart. I have always been impressed by his energy, his creative thinking, his provocative questions and his deep and pure interest in trying to understand basic mechanisms of unresolved clinical problems in our field. Despite his enthusiasm he always maintains a good dose of healthy skepticism. He has resisted the temptations of becoming Chair of Medicine, Dean or embarking on other academic honors on several occasions which allowed him to secure enough time for creative thinking and innovation. As an academic mentor he surrounded himself with critical individuals who challenged him, which he always found to be one of his most rewarding experiences.

Jim is an extremely creative and intellectually curious individual who has repeatedly been able to introduce cutting edge scientific concepts into our field, he has always behaved with the utmost integrity, and he has been a collegial and collaborative individual who has served as an ever-dependable resource for others. Some would describe him as a ‘happy warrior’ who never loses his grace in the face of difficulties. Cleary such personal attributes were bound to result in scientific excellence.

The man outside the lab and hospital

These scientific achievements would not have been possible without the support of his family, Phoebe his charming wife for 57 years and their two daughters, Phoebe Christine and Anna Birch. Jim is a true family man and now proud grandfather of four. Apart from being a successful role model physician scientist Jim is a profoundly and widely educated man with a great passion for music and literature. He loves to travel, exploring new countries and cultures with great curiosity. Outside the lab and the hospital Jim enjoys sports activities such as biking, sailing, swimming, and bird watching. Some of us may have witnessed that he is also a passionate dancer, sometimes opening the dance floor at our meetings.

We hope for the benefit of the liver community that Jim will continue his inspiring and innovative work for many more years in excellent health and we congratulate him with all our hearts as he receives this award for his eminent contributions to the field of hepatology.

Dr. Jim Boyer has been an active and valued member of the MDI Biological Laboratory community for nearly 50 years. He has contributed significantly to research in the field of liver health, and has provided passionate and personal guidance to many fortunate MDIBL alumni as a mentor to students, and as an engaged colleague to fellow scientists and researchers. We congratulate him on this award, which was presented virtually at the annual meeting of the European Association for the Study (EASL) of the Liver on August 27, 2020.
View Original Article
Next