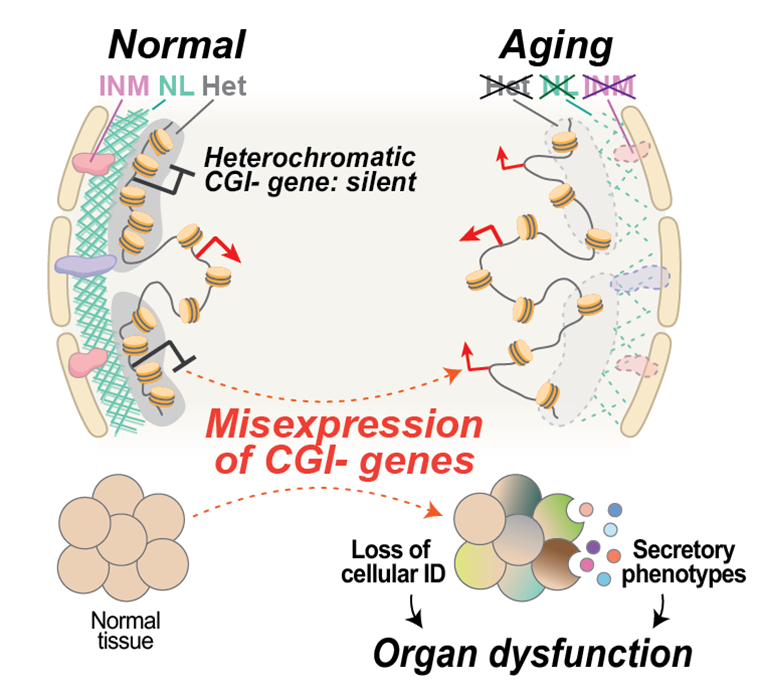 Aging in Mice Linked to Misexpression of Class of Genes

Genes lacking a particular structure known as CpG islands tend to go haywire in older cells, a study finds, potentially contributing to key facets of aging. But it’s not yet clear if the relationship is causal.

Aging is inevitable, and goes along with many changes in cells, tissues, and organs—including DNA damage, mitochondrial dysfunction, and telomere loss. But why we age in the first place and what drives these changes is still unknown. A study published December 15 in Science Advances suggests a possible answer, linking the increased activity of genes lacking long stretches of C and G bases with degeneration and aging.

As cells age, the architecture of chromatin, which packages DNA, unravels. Samuel Beck, a computational biologist at MDI Biological Laboratory, says he and his colleagues set out to explore whether these structural changes contribute to the degenerative changes also associated with aging. Specifically, the researchers focused on stretches of C and G bases called CpG islands (CGI). CGI are present in the promoters of around 60 percent of mammalian genes, termed CGI+ genes, but absent in the remaining 40 percent, called CGI– genes.

Previously, Beck and his colleagues showed that heterochromatin formation only regulates the expression of CGI– genes, while CGI+ genes are silenced through another mechanism called repressive Polycomb bodies. In the new work, “our hypothesis was that aging, and its associated chromatin architecture disorganization, results in dysregulation of genes lacking CpG islands,” says Beck. Looking at gene expression in the kidneys and hearts of a mouse population generated by breeding eight inbred strains with one another, which mimics the complexity of genetics in the human population, the team found that CGI– genes tend to be upregulated in aged tissues. In some mice, CGI– genes in the kidneys were upregulated, while other mice of the same chronological age didn’t show this misexpression. When the researchers took a closer look, they found that mice with upregulated CGI– genes had a higher incidence of renal dysfunction. Misexpression of CGI– genes—meaning that they’re expressed when they shouldn’t be—is associated with the physiological deterioration of aging, Beck says.

“This is a strong descriptive study showing an association between heterochromatin disruption and the activation of genes devoid in CGI promoters (CGI–),” writes University of Edinburgh geneticist Tamir Chandra, who was not involved in the study, in an email to The Scientist.

Our hypothesis was that aging, and its associated chromatin architecture disorganization, results in dysregulation of genes lacking CpG islands.

The researchers also investigated whether CGI– genes are connected to what’s known as cellular identity. Cells making up the heart, muscles, kidneys, or other organs usually express different genes to carry out their functions. As cells age, they also lose this cellular identity, and the researchers wondered if misexpression of CGI– genes could help explain why. Analyzing aged mouse kidneys, Beck and his team saw that genes typically expressed in the spleen, intestine, eye, and liver start to be expressed in aged kidneys—and the majority of these genes were CGI– genes. “That is one way how aged cells lose their identity,” suggests Beck.

Aged cells also secrete signals in an uncontrolled way, but what triggers this secretion is not yet known. Analysis of the products of CGI– genes in mouse kidneys and hearts indicated that many encode secreted proteins, including cytokines, chemokines, growth factors, and proteases. Proinflammatory secretory CGI– genes were misexpressed in cells in which the nuclear and chromatin architecture was disrupted. According to the authors, this indicates that the secretory phenotype of aged cells is linked to disruption of the nuclear architecture and resulting upregulation of CGI– genes.

“This study pinpoints and defines the specific set of genes that are aberrantly activated during aging and the consequences,” geneticist Weiwei Dang from Baylor College of Medicine, who was not involved in the study, writes in an email to The Scientist. However, he sees several limitations to the study, including that “most of the data presented (with some exceptions) are association data between aging and transcription, without further digging into the underlying causes of these changes during aging,” and that “key regulators that distinguish between CGI+ and CGI– genes remain to be identified or investigated.”

Dang also notes a “lack of potential aging intervention strategy based on these findings.” However, Beck suggests that if overexpression of CGI– genes does turn out to drive chromatin decondensation, then inhibiting CGI- gene expression could become such a strategy.