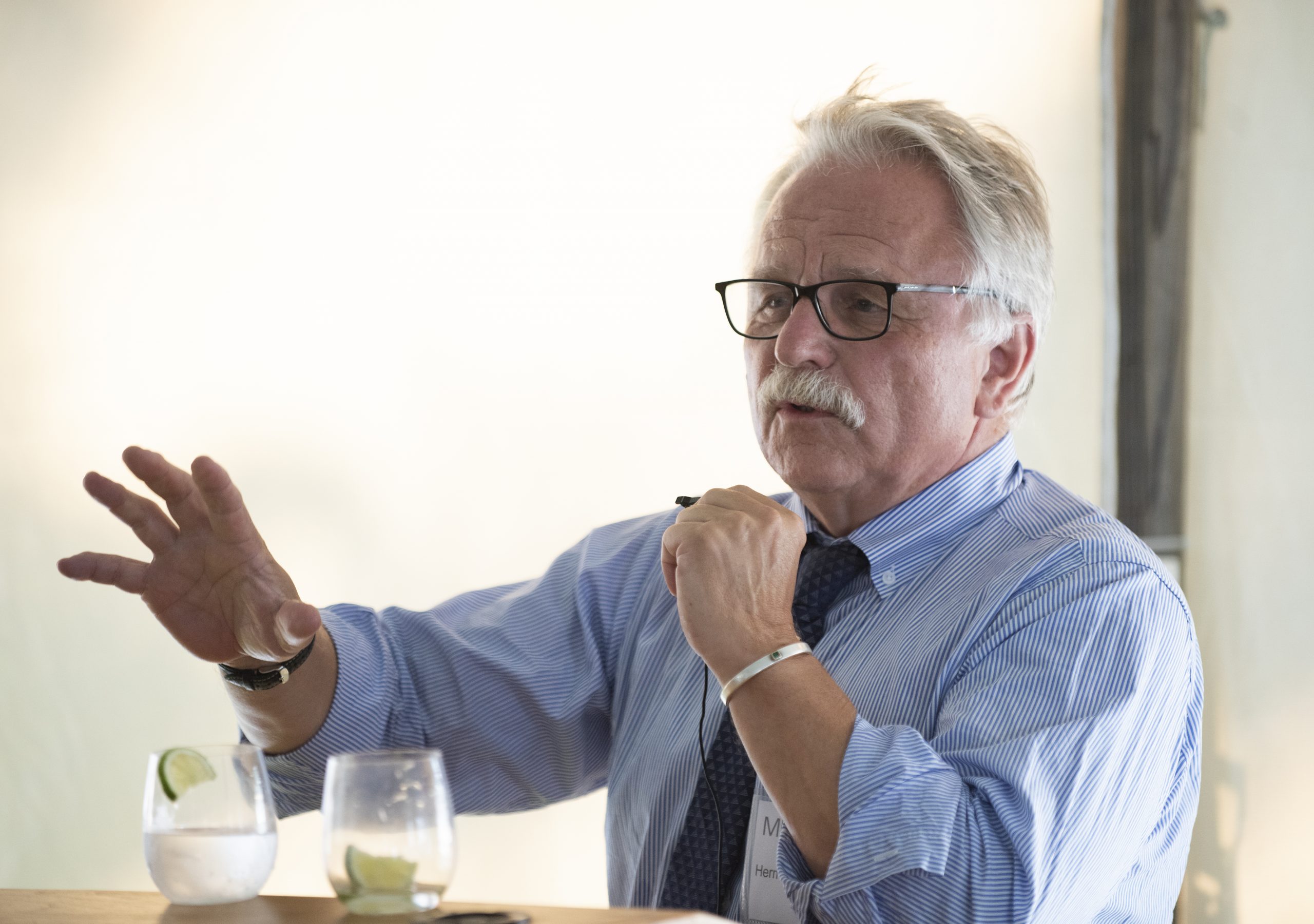 He’s published some 1200 research articles, as a lead or contributing author. And Haller’s impacts on the field stretch beyond that work: he has held numerous academic posts in Germany, the U.S., and China – sometimes simultaneously – advancing institutions and the education of others across continents.

Among Germany’s nephrological academics, Franz Volhard is a 20th century figure comparable to the U.S. kidney researcher Homer Smith (himself a venerated MDIBL leader), with numerous honors given in their names.

“This makes my CV so complicated to explain,” Haller says, mock-ruefully. The 2022 Volhard Medal — presented by the German Society of Nephrology — he adds, is “kind of like a lifetime achievement award.” 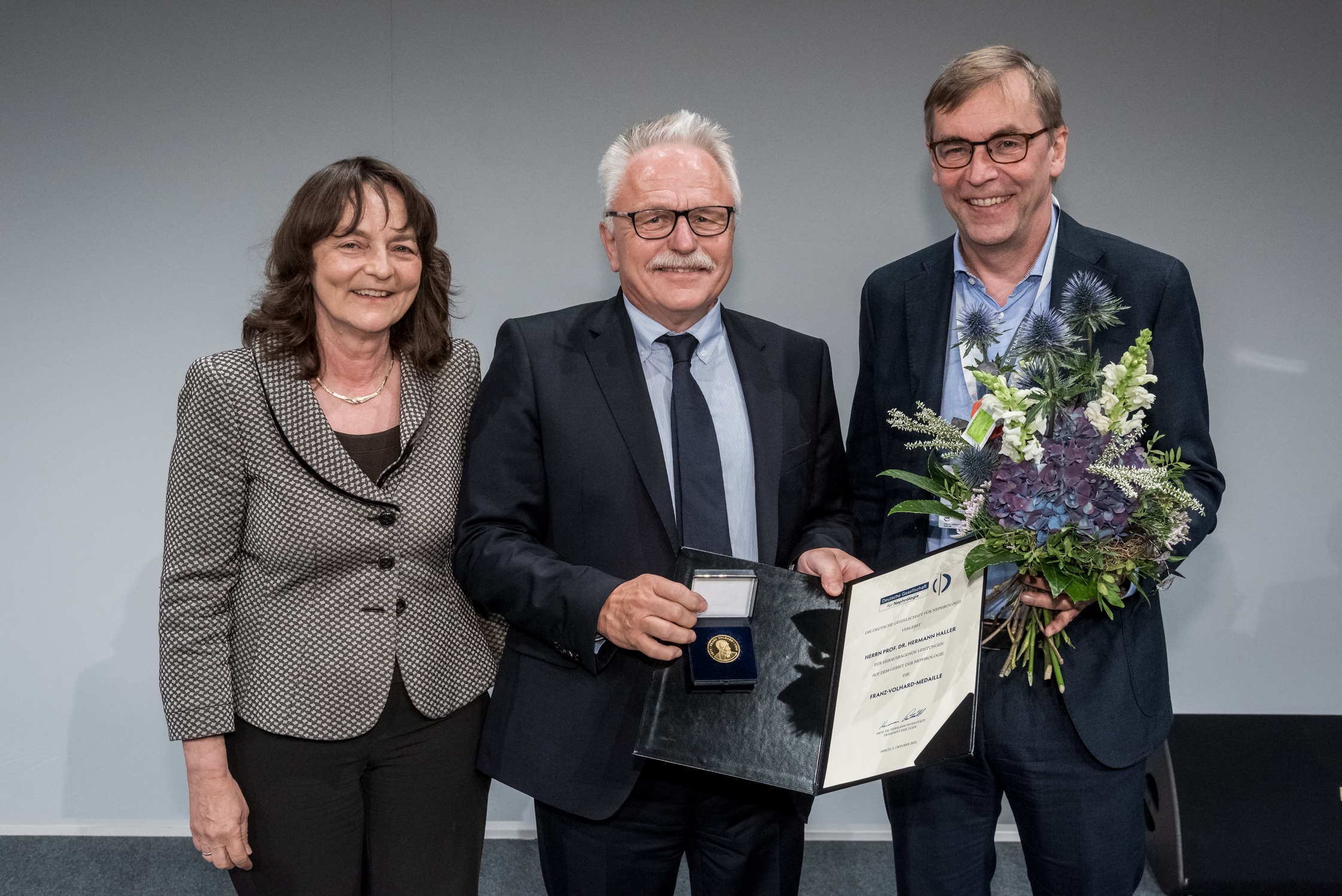 In recognitions from overseas, the German Society of Nephrology awarded the prestigious Franz Volhard Medal to MDIBL’s President, Dr. Hermann Haller, in October 2022. It’s the Society’s highest honor, given for “outstanding scientific contributions in nephrology and for sustained achievements in academic medicine.” Photo © 2022 Aey Congresse GmbH

Those achievements range across clinical and experimental advances in the fields of nephrology and hypertension. Haller has contributed seminal work on the pathophysiology and treatment of diabetic kidney disease, vascular diseases of the kidney, and, most recently, the regeneration of the kidney from stem cells — with a focus on vascularization.

He’s published some 1200 research articles, as a lead or contributing author. And Haller’s impacts on the field stretch beyond that work: he has held numerous academic posts in Germany, the U.S., and China – sometimes simultaneously – advancing institutions and the education of others across continents.

In addition to receiving the Volhard Medal, Haller this fall was inducted into the German National Academy of Sciences, also known as the Leopoldina (for its 17th century benefactor, Holy Roman Emperor Leopold I). The Academy advises the German government on scientific questions and election to its membership is considered the country’s highest academic recognition.

Haller says he’s gratified and humbled by the recent honors, and proud to be in company with earlier Volhard Medal recipients such as Dr. Heini Murer, Dr. Gerhard Giebisch, and Dr. Donald W. Seldin.

“But on another level, to be president of MDI Biological Laboratory is in a way the pinnacle of my whole career as a translational researcher and a clinical nephrologist over the last 40, 50 years,” he says. “The cradle of renal physiology really has been MDIBL in recent years… all the important researchers have been here.”

In the 1990s, Haller served as Professor of Medicine and vice chairman of Nephrology at Germany’s largest university hospital, the Charité – Universitätsmedizin in Berlin.

He later held several posts at the Hannover Medical School, as Dean of Studies (establishing a well-regarded patient-based curriculum called HannibaL), leading its Department of Nephrology for two decades, and directing IFB-Transplant, an integrated research and treatment center for kidney transplantation.

Haller has also been a leader in Hannover Medical School’s international outreach efforts, and he’s developed academic connections in China, where in 2011 he was awarded an honorary professorship at the Huazhong University of Science and Technology.

Haller joined the MDI Biological Laboratory’s faculty in 2007. And in 2018 he became its president.

In Germany last month, Dr. Haller’s former student and colleague, Dr. Marion Haubitz, presented him with the Franz Volhard Medal. In an email, she says his charisma and generosity have benefited generations of young scientists.

She adds that Haller, whose undergraduate degree is in history of the arts, taught them to look at patients in new ways, as they might consider artworks such as the Mona Lisa.

Plus, she adds, “the plays for Christmas in his departments are legendary.” 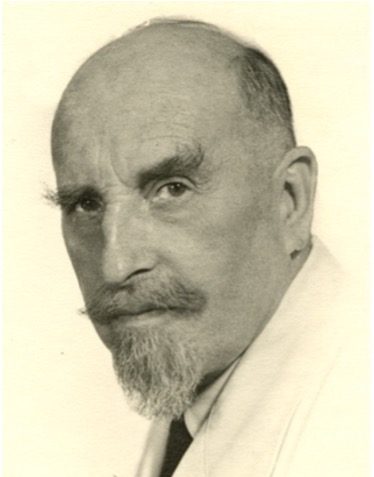 Franz Volhard (1872-1965) made several important contributions in the fields of cardiology and nephrology. He is especially remembered for his collaborative work with pathologist Karl Theodor Fahr (1877–1945) in Mannheim, where the two men carried out research of kidney diseases.

Solving the Riddle of the Mysterious Kidney Ailment Plaguing Farmers Around the World Environmental toxicologist Nishad Jayasundara, Ph.D., had a problem: his team had identified potentially toxic agricultural chemicals in the drinking water of Sri Lankan farmers suffering from a mysterious kidney disease called chronic kidney disease of unknown etiology or CKDu (so named to...