Forging Connections ‘At a Very Human Speed’: Reflections on Art and Science at the MDI Biological Laboratory

The following is excerpted from a Tedx talk at Georgia Southern University on Oct. 28 on the theme of “Connecting Creatively” delivered by Reid Loveless, Georgia Southern student and MDI Biological Laboratory 2016 Summer Fellow. The TEDx Program supports local organizers who want to create events in their own communities that fulfill the TED “ideas worth spreading” mission. Photo caption: “Propagation” by Ben Lincoln.

One of the last places I would have expected to learn about art would be a biology lab, but when I had the opportunity to conduct research at the MDI Biological Laboratory, I found myself not only at a research institute, but an art exhibit.

I had worried I might be spending two months in a place with white walls populated by people who only wanted to talk about research, that I would feel embarrassed if I didn’t know something or if I had a question. When I first walked in, I was relieved because it wasn’t what I had expected. What was it that relieved my worries? Art.

When the lab built a new facility in 2012, it asked local artists to exhibit their work in order to brighten up the bare walls. This interest resulted in a series of annual “Art Meets Science” exhibits, soon to be in its sixth year. Since the lab wanted to explore the intersection between art and science, it also invited artists to collaborate with scientists.

One of those artists was Ben Lincoln, who collaborated with scientist Dustin Updike. Ben said the collaboration made him even more aware of how similar the processes of experimentation and discovery are for artists and scientists: “Just as a writer can change the meaning of a sentence by adding a few words or changing the punctuation, Dustin is able to change how a cell expresses itself by manipulating the language of its genes,” he reflected.

At the same time, artist Nancy Manter was collaborating with scientist Voot Yin, who studies organ regeneration in zebrafish. After looking through Voot’s notebooks and drawings, she tried to imagine what a scientist’s life was like in terms of seeing. To visually and physically connect their work, she embedded images and diagrams from Voot’s work into her paintings, as well as words that had significance for his work as well as for art, words such as “regeneration” and “transformation.” 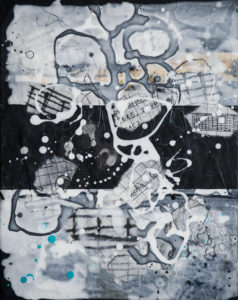 “Solve the Mystery #2” by Nancy Manter

Voot recalls that he would often arrive at his lab totally focused on his research, but when he passed the art, he would remember the connection he had made with Nancy. The recollection helped him take a step back, reflect and become re-inspired.

The purpose of these collaborations was not only to connect artists with scientists, however, but also to connect the community with art and science.

The first time I was working in the lab I noticed unfamiliar faces peeking through windows. When I realized the faces belonged to visitors to the Art Meets Science exhibit, I wondered if this was their first time in a lab, and if so, if I was the first person they had ever seen doing research in biology. Though the visitors may have come for the art, it was often the connections they made with scientists, artists and other members of the community that they left with.

My summer at the MDI Biological Laboratory was the opposite of everything I had expected. I worked in a space that embraced the beauty of not knowing, that welcomed discussion of art and science and that encouraged connections between artists and scientists. When I think back on the experience, I don’t remember it in terms of words, or even pictures — I remember it in terms of feelings. The link between every single field and job is us. We are humans first, artists and scientists second.

Our fields are not just about discovery and creation, but collaborating and connecting with others. As Ben wrote of his collaboration with Dustin: “I think in different, but complementary, ways. Art and science both are about connections — between individuals and to the planet we all share. Scientists work to understand how these connections function; my work as an artist is to create them one viewer to one work at a time, at a very human speed.” 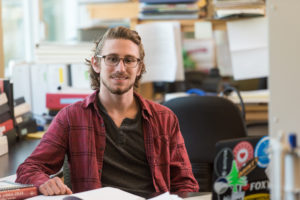 Alum Alfred D. Doyle, Ph.D., talks about his experiences at the MDI Biological Laboratory and how they shaped his career. Can you share a bit about your time at MDIBL? In 1995, I spent a wonderful summer as a student fellow at MDIBL and had a formative experience with Dr. Rui Wang researching dogfish cardiomyocytes....