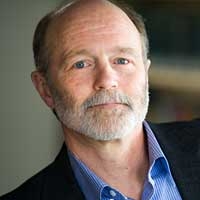 Recent work in my laboratory has shown that cell dehydration causes rapid damage to cytoplasmic proteins. Ongoing studies focus on defining the mechanisms utilized by cells to detect, degrade, and repair proteins damaged by acute dehydration. We are also defining the mechanisms utilized by cells to protect proteins from damage during prolonged exposure to dehydrating conditions and the sensing and signaling pathways that activate genes required for cellular salt and water balance.

Dr. Strange was recognized by Maine magazine in June 2017 as one of 50 Mainers who are “leading by example.” The magazine highlighted Mainers who are driven to do what’s best for their communities, “no matter what the odds or expectations.” The leaders  selected by the magazine were chosen because they “take action, even if they don’t know who will follow.” In the process they make their communities “healthier, more prosperous, more educated, more diverse, and more culturally rich.”

Innovation’s Family Tree: Maine’s Home-grown Science Is Coming Into Its Own
Mainebiz · July 29, 2019

Researchers Write about Brain-Machine Interfaces, How Eels Shock, and What Shark Bites Have to Do with Rebuilding Broken Bodies
Scientific American · March 19, 2019

Accelerator Hub to Boost Growth of Bio-Tech Industry in Maine and Beyond
Mainebiz · February 11, 2019

The Feds Have Kicked in $3.5 Million to Spur Research Companies to Help Mainers Get Healthier
Bangor Daily News · February 6, 2019

MDI Biological Laboratory Has a New President
Mainebiz · May 10, 2018

Living Long and Living Well: is it Possible to Do Both?
Regenerative Medicine Network · June 8, 2017

What If Stimulating Regeneration Were As Simple As Taking a Drug?
Breaking Through · May 31, 2017

Looking Beyond Stem Cells and Tissue Engineering: What if Lost and Damaged Tissues and Organs Could Be Regenerated Simply by Taking a Drug?
Breaking Through · March 17, 2017

Looking Beyond Stem Cells and Tissue Engineering: What If Lost and Damaged Tissues and Organs Could Be Regenerated Simply by Taking a Drug?
Regenerative Medicine Network · March 16, 2017

Scientists at MDI Biological Laboratory Discover a Tiny Molecule That May Be Able to Heal a Damaged Heart
Bangor Daily News · February 27, 2017