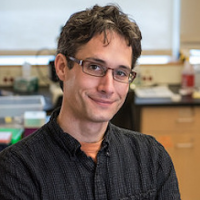 The Rollins Laboratory wants to enable people to enjoy longer, healthier lives. A recent revolution in aging research has led to the discovery that the activity of single genes can control the rate at which we age. We are building on this revolution by studying how life-extending interventions like dietary restriction regulate gene expression to help protect our cells and tissues from declining with age. We use the roundworm, C. elegans, as a model organism to study human aging, as roundworms share many of their genes with us and because their short lifespans allow us to rapidly test for interventions that extend longevity.

Gene expression is regulated on multiple levels: by transcription rates of DNA into mRNA copies, by recruitment of mRNA to the ribosome to be translated into proteins and by the degradation rates of the mRNA or protein products. We have previously shown that when C. elegans are treated with dietary restriction, many longevity genes are regulated exclusively on the level of translation. Protein translation is made possible by the ribosome, an intricate molecular machine comprised of multiple proteins. Our current work explores how regulation of longevity genes occurs under dietary restriction by investigating how the protein composition of the ribosome determines which mRNAs are selected for translation and which are not.

Anti-aging: the worms that may help us live longer, healthier lives
The Observer UK · January 5, 2021

The Aging Mind: A Team Approach to Understanding the Relationship Between Aging, Alzheimer’s and Parkinson’s Disease
Breaking Through · November 18, 2020

‘The Molecular Machine Between Diet and Longevity’ to be subject of online Science Café
Press Release · May 29, 2020

Advances in Quest for Immortality
The Guardian · January 23, 2020

Scientists Have Extended the Lifespan of These Animals by 500 Percent
Head Topics · January 9, 2020

Scientists Expand The Lifespan Of A Worm By 500 Percent – The Equivalent Of 400 Years In Humans
IFL Science · January 9, 2020

Scientists Have Extended the Lifespan of These Animals by 500 Percent
Newsweek · January 9, 2020

Scientists at the MDI Biological Laboratory Are Decoding the Genetic Mechanisms of Aging and the Role of Dietary Restriction
Regen Health Solutions · October 16, 2019

Scientists are Trying to Find Ways to Slow Down the Process of Aging
Tribune Byte · October 12, 2019

Is Any Drug Possible in Future to Prolong Healthy Lifespan?
Discourse on Development · October 11, 2019

Scientists Are Decoding the Genetic Mechanisms of Aging
Phys.org · October 10, 2019

Scientists at the MDI Biological Laboratory Are Decoding the Genetic Mechanisms of Aging
Bio-IT World · October 10, 2019

Scientists at the MDI Biological Laboratory Are Decoding the Genetic Mechanisms of Aging
Bioengineer.org · October 10, 2019

Scientists at the MDI Biological Laboratory Are Decoding the Genetic Mechanisms of Aging
BrightSurf.com · October 10, 2019

Scientists at the MDI Biological Laboratory Are Decoding the Genetic Mechanisms of Aging
Press Release · October 10, 2019

Living Long and Living Well: is it Possible to Do Both?
Regenerative Medicine Network · June 8, 2017

Living Long and Living Well: Is It Possible to Do Both?
Press Release · June 5, 2017

Benjamin Garthoff is a Maine native and a graduate of the University of Maine at Augusta, where he received his undergraduate degree in general biology. Prior to joining the MDI Biological Laboratory, Garthoff was employed as a certified nursing assistant (CNA) for nearly two years at a nursing home for dementia patients. At the MDI Biological Laboratory, he was the first hire in the Rollins lab and is responsible for general maintenance of the lab, C. elegans lifespan and thermotolerance assays and molecular biology experiments. Garthoff’s long-term goals include exploring potential routes to graduate education and playing a bigger role in experimental design.