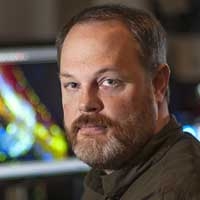 Germ cells are the progenitors of reproductive cells, and the only cells in sexually reproducing animals that have the potential to give rise to all of the cell types of each subsequent generation. In our lab, we want to understand how these totipotent and immortal properties are conferred.  Part of the answer comes from special aggregates called “germ granules” that are found just outside the nucleus of germ cells. Recent research has shown that germ granules play a critical role in maintaining the totipotent and immortal properties of the germline. Take away an organism’s germ granules and it will become sterile. In some organisms, introducing germ granules in cells outside of the germline will restore cellular immortality and totipotency, and will reprogram them into germline stem cells.

Germ granules are conserved in their appearance, subcellular localization, and composition from worms to humans.  Because of this, we are able to quickly ascertain the mechanisms by which germ granules function by studying them in a small roundworm called C. elegans.  This well-established model organism is responsible for much of what we know about developmental genetics in humans.  Using fluorescence microscopy, germ granules (called P granules in C. elegans) can be observed in the germ line of transparent worms at all stages of development.  The genetic power of C. elegans combined with its short 3-day generation time and transparency offers an opportunity to study the function of germ granules that isn’t feasible in more complex model organisms.

A focus of our research is to understand the biophysical properties of germ granules, how they are assembled, and the components that affect their subcellular distribution.  We have shown that germ granules are held together by weak hydrophobic interactions, and that they extend the size exclusion barrier of the nuclear pore complex out into the cytoplasm of germ cells.  Here germ granules create a specialized microenvironment that facilitates post-transcriptional processing events that are exclusive to the germline.  We are continuing to investigate the specifics of those processing events to understand how they are used to maintain the totipotent and immortal properties of germ cells, and how these mechanisms can be applied to unlocking stem cell-like properties in other cell types.

What Lava Lamps and Vinaigrette Can Teach Us About Cell Biology
Nature · March 14, 2018

‘A Geneticist’s Toolkit’ to be Subject of MDI Science Café
Press Release · January 27, 2017

Come work with C. elegans and learn genetics!  Summer INBRE and NSF REU fellows have used CRISPR/Cas9 technology and both forward and reverse genetics in C. elegans to understand genes that regulate germ-granule biogenesis.  Each student is partnered with an experienced technician that will assist them in their project.  At the end of the summer, students present their findings in a poster or a talk session at the student symposium.

GSBSE students:  We are looking for graduate students to join our lab.  Please contact me to discuss potential rotation projects.

Go to our web page to see where we work, what we do, and to meet our lab.