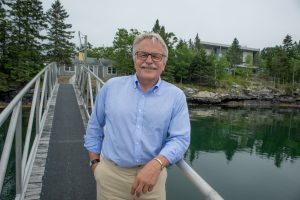 The University of Maine Institute of Medicine has announced its seminar series for the fall 2021 semester, with events scheduled from noon–1 p.m. on Fridays in September and October.  The series kicks off Sept. 17 with a webinar titled, “A New Dawn for Chronic Kidney Disease – SGLT-2 Inhibition as a Novel Strategy,” presented by Herman Haller, president of MDI Biological Laboratory and Director of the Department of Nephrology and Hypertension at Hannover Medical School in Hannover, Germany.

Hermann Haller, M.D. an international leader in kidney disease, hypertension and kidney and blood vessel regeneration, was appointed president of the MDI Biological Laboratory on July 26, 2018.

Haller has been associated with the MDI Biological Laboratory for over two decades, and has served as a member of the faculty since 2007. He is also a full professor and chairman of the Division of Nephrology at the Hannover Medical School in Germany.

“The MDI Biological Laboratory has played an enormously important role in our understanding of kidney, cardiac, vascular and liver diseases over the last 120 years and I am pleased to be working with the board, faculty, visiting faculty, staff and our many supporters in continuing to build on this extraordinary legacy as we seek to understand our ability to repair the damage caused by disease and injury,” Haller said.

Haller received his medical degree at the Free University of Berlin and completed his postdoctoral work at Yale University. He has published more than 700 peer-reviewed articles, holds six world-wide patents and has founded four biotech companies. He has received numerous honors and awards and serves on numerous advisory boards, including Bayer, Boehringer Ingelheim, Genzyme and Novo Nordisk.

UMaine Institute of Medicine events are free but registration is required. Please use this link to register for the Zoom event.