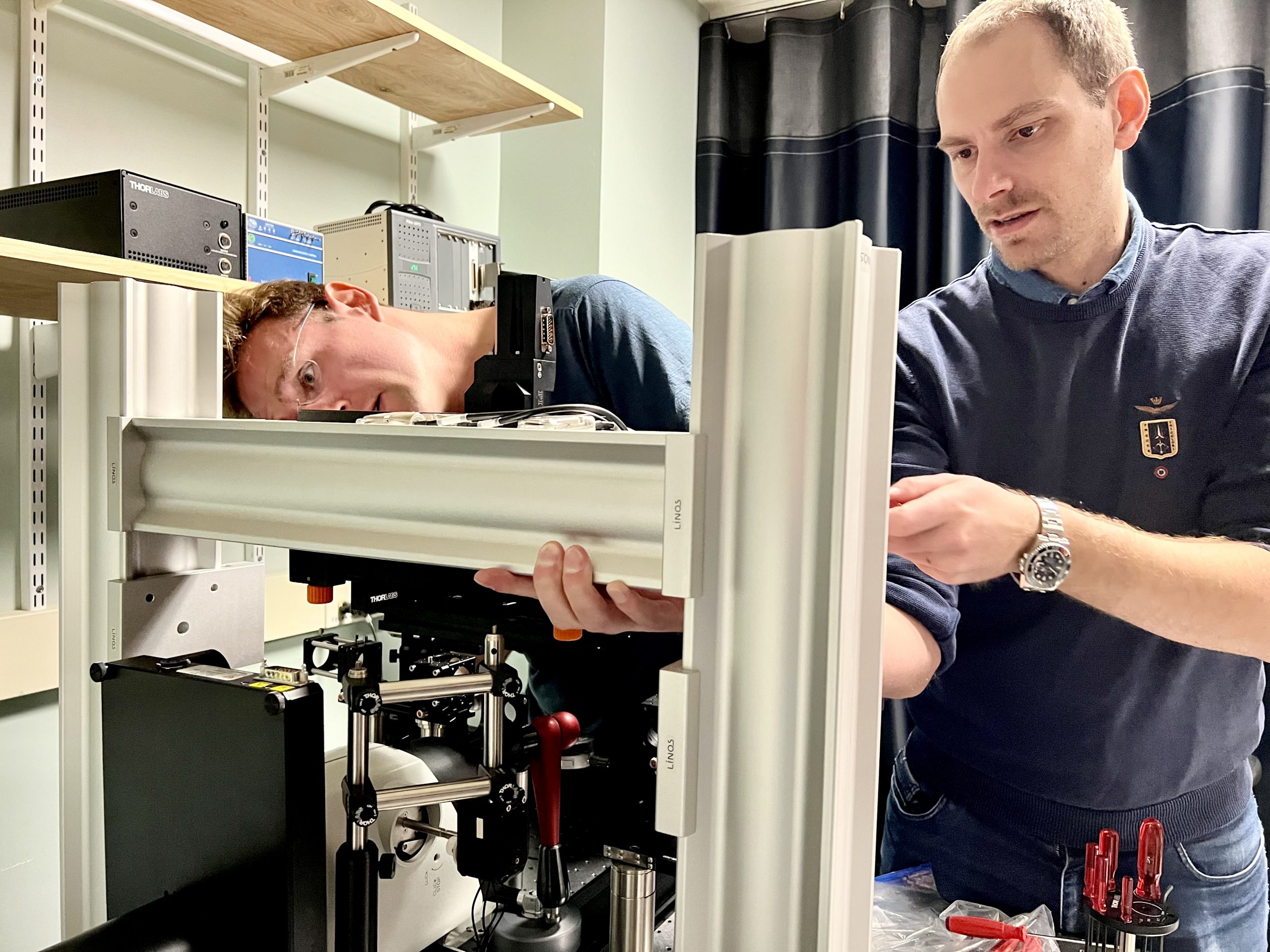 “With such a microscope, I can image entire limbs of axolotl. And I can exactly show where the nerves are in the limb. And by having such a map I can address multiple questions.” - Marko Pende, Ph.D.

Help us change the way our scientists see!

Philanthropic support from donors like you fosters creativity and innovation and helps change the way we see the world.

MDIBL’s new, highly-advanced lightsheet microscope is complete and in use, after years of dreaming, months of waiting, and many weeks of work. The Lab’s faculty seem a little bit awed by the possibilities. “Now the challenge is to really open up your mind,” says Iain Drummond, Ph.D., Director of the Kathryn W. Davis Center for Regenerative Biology and Aging.

Already, the team that made it happen is churning out images: 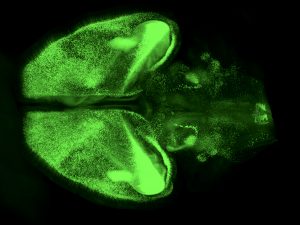 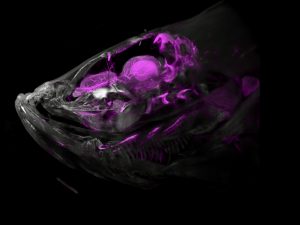 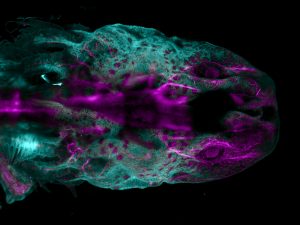 An entire mouse brain, a zebrafish and an axolotl salamander, each imaged in 3D in just hours by Marko Pende, Ph.D., using MDIBL’s new mesoSPIM microscope.

It’s called a mesoSPIM, which stands for “mesoscale selective plane illumination microscopy”. That’s a mouthful of a name, but it is a tight description of the technology – in which comparatively large animal samples can be moved efficiently through sheets of light produced by lasers to build three-dimensional images of entire organisms, zoomable down to scales smaller than a single cell.

And it’s one of only four such in the country. Scientists and students at MDIBL and all around Maine will be able to use it for their explorations of new frontiers in comparative biology.

“We have been dreaming it for two years and today is the day when it’s getting built,” said Prayag Murawala, PhD., in mid-December, as he sat in a basement room of the Martha and Wistar Morris building. Behind him the complicated array was taking shape, looking something like a very serious, marvelous erector set.

The system is a labor-saver, as compared to more traditional 3D tech that requires making and imaging hundreds of sections of a small sample, then deploying significant computer power and time to knit them together. The magic of the mesoSPIM is its capacity to image a sample “in toto” without sectioning: instead, laser-produced sheets of light excite molecules that have been pre-tagged to fluoresce at certain wavelengths.

Animation: An entire mouse brain, imaged by Marko Pende, PhD., using the cutting-edge mesoSPIM microscopy he and colleagues constructed this month at MDIBL. The technology allows entire organs and organisms to be imaged in 3D, zoomable down to the subcellular scale.

“Of course, I’m extremely happy,” said Murawala, who is an international leader in the development of the axolotl salamander as a model for discovering new pathways for regeneration.

“I am looking forward to a functional mesoSPIM that we will have at MDIBL…where everyone can use their various samples; large samples, meso-scale samples, that can be imaged at a subcellular resolution. That has been my dream for a while.”

It’s a sentiment shared by his MDIBL collaborators, Frederic Bonnet, Ph.D., Manager of MDIBL’s Light Microscopy Facility, and Marko Pende, Ph.D., who is a post-doctoral Fellow in the Murawala lab and an expert in clearing samples to make them transparent for microscopy.

Pende’s research currently focuses on the role nerves play in the regeneration of damaged limbs, and the mesoSPIM will be a powerful tool for mapping cellular and subcellular systems in model animals.

“Entire institutes are built around mapping the nervous system,” Pende notes. “With such a microscope, I can image entire limbs of axolotl. And I can exactly show where the nerves are in the limb. And by having such a map I can address multiple questions.”

Pende spent days in the microscopy room, tending to the mesoSPIM’s construction. Once it was basically operational, his first question was “can I make this microscopy work?” But he’ll soon follow-up with biological queries such as this: “When an axolotl has a cut nerve in its limb and then it re-enervates the nerve, is the re-enervation faithful? Does the nerve return to the same place or is it just in the vicinity, or someplace completely else?”

Pende also sees the platform as a valuable new tool for drug discovery. Imagine, for instance, that you want to test a therapy that could help repair aging blood vessels: using a model organism such as the zebrafish, the mesoSPIM would allow you to observe that vascular process in three dimensions, while recording volumetric data to help prove the concept.

“If you use drugs that improve vascularization in whatever organ, and you can show that in an older adult fish, that it is actually the case, then this is extremely powerful,” Pende says.

The mesoSPIM is the brainchild of Fabian Voigt, Ph.D., who pioneered the system as something of a side project while earning his doctorate in Neuroscience in the lab of Dr. Fritjof Helmchen at the University of Zurich. Both men have been open-handed in assisting the MDIBL initiative.

Now a postdoctoral fellow at Harvard’s Department of Molecular and Cellular Biology, Voigt designed the system as an open-source research platform. And he volunteered close to a week at the MDIBL campus in early December to assist with the construction of the latest iteration. It’s his 19th.

“The idea was to build a system that could be really, really fast.,” he says.  “To scan say, a whole mouse brain within a couple of minutes, and have data quality that is so-called isotropic, meaning that no matter how you rotate the sample in the computer, no matter from where you look at the data you have kind of the same resolution in every direction in space. And back then there was no commercial system that could fulfill all these specs at once. And so I set out to develop my own.”

MDIBL’s faculty team spent months sourcing and obtaining the hundreds of individual parts needed for the project. The $500,000 cost was funded by the National Institute of General Medical Sciences (NIGMS) via its Centers of Biological Research Excellence (COBRE) program. And the Laboratory’s donors are pitching in too, with generous contributions for software to support expanded capabilities for the mesoSPIM.

Iain Drummond, Director of the Kathryn W. Davis Center for Regenerative Biology and Aging, and the Principal Investigator for the Laboratory’s phased series of COBRE grants, says MDIBL was well-positioned to win the federal award.

He cites the existing microscopy core, the skilled technical services of Bonnet, and the Laboratory’s position as a statewide hub for another federally-funded program, the Maine IDeA Network of Biological Research Excellence – a collaborative effort among 14 Maine institutes, colleges and universities that includes sharing scientific infrastructure such as the mesoSPIM.

“I think there’s going to be tremendous demand for it,” Drummond says, noting that MDIBL is seeking further financial support for travel grants to help more scientists access the technology in person.

A kidney and stem-cell specialist, Drummond is a leader in comparative biology based on the zebrafish, which is semi-transparent and has significant capacities to regenerate damaged organs. The mesoSPIM’s arrival has him dreaming too.

“It’s just like, if you looked at New York City and saw a person standing at a bus stop but then you were able to zoom out and see, oh, how many people are at the bus stop? What are all these cabs doing there? And all the traffic, which is really the flow of people, and so, rather than having to piece it together from parts, we get the whole picture at once… It expands your thoughts; now the challenge is to really open up your mind.”

Meet Marko Pende, Ph.D., a postdoctoral researcher in the Murawala lab at MDI Biological Laboratory. Marko investigates limb regeneration in axolotls, and is also an award-winning science photographer who’s inventing new ways to “clear” sample tissues, making them transparent for easier viewing. This fall, with his colleagues in the Light Microscopy Facility, Pende is building...