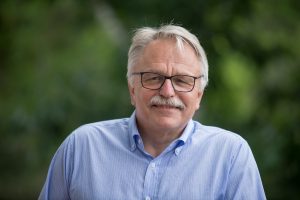 Chronic kidney disease affects 30 million in the United States. Without treatment, the kidneys may fail, in which case patients must undergo dialysis, in which a machine is used to rid the blood of harmful waste, or transplantation. The disease represents a huge — and growing — health care burden, costing about $42 billion per year in Medicare expenses alone. Because the most common causes are diabetes, heart disease and hypertension, all of which are increasing as the U.S. population ages, the disease is a major public health issue among those age 60 and over. It also presents a diagnostic challenge since there are typically no symptoms in the early stages.

While kidney disease can be treated with dialysis and transplantation, the dream is  kidney regeneration. In his research at the MDI Biological Laboratory and in Germany, Haller is seeking to understand the molecular mechanisms underlying kidney regeneration in animals such as the  zebrafish that can regenerate organs. He is using this knowledge to manipulate stem cells for the purpose of regenerating kidneys in humans. Haller’s research reflects the current focus of the 120-year-old institution on regenerative medicine and aging, as well as its historical focus on kidney physiology, a field in which it is renowned for its contributions.